In June 2021, Pratt Paper announced plans to build a paper mill and corrugated box plant on property located in the City of Henderson, near Old Corydon Road and the KY 425 Bypass. The property dedicated to this plant is a 200-acre lot that was carved from a larger 298.5-acre parcel, the Pritchett Farm. The City of Henderson and Henderson Water Utility purchased the farm with $ 5 million in cash provided by HWU.

HWU and Pratt Paper (KY) LLC entered into an agreement in August 2021 which committed HWU to construct water and wastewater facilities to serve Pratt. Pratt, in return, agreed to use water and sewer services at a high rate of use, and to pay for those services at current HWU rates.

HWU engaged J.R. Wauford and Co., Inc., Consulting Engineers, of Nashville, Tennessee, to perform engineering services and prepare a preliminary engineering report outlining improvements needed in the HWU water and wastewater systems to provide needed flow and pressure to the Pratt development. That report was completed in December 2021. It outlined six projects that must be completed to serve Pratt.

The City of Henderson is served by the North Water Treatment Plant on North Water Street @ Fifth Street. The NWTP has a stated capacity of 12 million gallons per day (MGD), and current average daily use is a consistent 6 to 6.5 MGD, so there’s plenty of capacity at the plant.

The Pratt complex is located near the edge of HWU’s “College” pressure zone, which is the area from roughly Fernwood Cemetery to the west, along U.S. Highway 60. It is currently served by an old water pump station near Fair Street and the College water storage tank, which boost static pressure at the Pratt development to around 60 psi, which meets Pratt’s stated needs. However, at the flow Pratt requires, that static pressure will be reduced due to dynamic head loss in the piping system. Providing Pratt’s required pressure AND flow will require a new water booster station, a new water tank of higher capacity and height, and larger diameter water supply piping.

Analysis of water use data by J.R. Wauford shows that customers in the College pressure zone currently use approximately 2.63 MGD of water. This includes two sales points for the Henderson County Water District, and several large industrial customers around Ohio, Community and Dana Drives.

When sizing water distribution systems for industrial customers, several potential issues need to be taken into consideration including minimum water pressure requirements, peak process and potable water demand, and fire protection requirements. Upon study of the system, it was determined that a new water storage tank would be required, since the existing College tank would not support the pressure required by the Pratt facility allowing for normal water level variation in the College Tank and dynamic friction losses in the distribution system.

Further, the existing College Tank’s storage volume is 500,000 gallons. This would only allow for 2 to 3 hours of storage for existing and proposed demand in the pressure zone. A new, 2.0-million-gallon tank would provide an average of 9 to 12 hours storage for the zone. While this does not provide the minimum 24 hours (average daily consumption) of storage stated in the adopted Kentucky Division of Water Design Criteria, the criteria allow for a shorter time if an emergency means of operation is provided, such as a standby generator. Minimizing distribution system storage volume reduces water age and generally reduces additional formation of disinfection byproducts, which could be an issue during the summer months or when the proposed industrial customer shuts down for maintenance or holidays.

The 2-million-gallon, elevated storage tank project has been bid and awarded, with the contractor being Phoenix Fabricators & Erectors, Avon, Indiana, with a bid price of $ 5,460,700.00. The total appropriation for this phase was $ 6,009,700. Phoenix also has a production facility in Sebree, Kentucky.

Due to the significant fire protection requirements for the proposed industry, it was determined that fire protection will be provided by a separate dedicated tank. This tank will be a ground-mounted, 1-million gallon, concrete tank. The project to build this tank has been bid and awarded, with the contractor being CROM, LLC, of Gainesville, Florida. The contract amount is $ 1,620,776, and the total appropriation for this phase was $ 1.795 million.

On the sewer side, Pratt’s wastewater flow will be handled by a new submersible sewage pumping station to transport wastewater from the proposed industrial customer through a new 16-inch PVC force main to U.S. Highway 60 where the 16-inch force main is proposed to manifold with the existing 18-inch Industrial Park SPS force main. The sewage pumping station is proposed to consist of two 10’ diameter precast wet wells with space for two pumps in each wet well. Initially, three constant speed pumps are proposed to be installed where two pumps operating in parallel can produce the design condition of 1,500 gpm at 80 feet TDH. Space is proposed for a fourth pump to allow the pumping station capacity to be increased if needed to accommodate future flow. The North Wastewater Treatment Plant on Drury Lane has adequate capacity to handle the increased flow from Pratt. 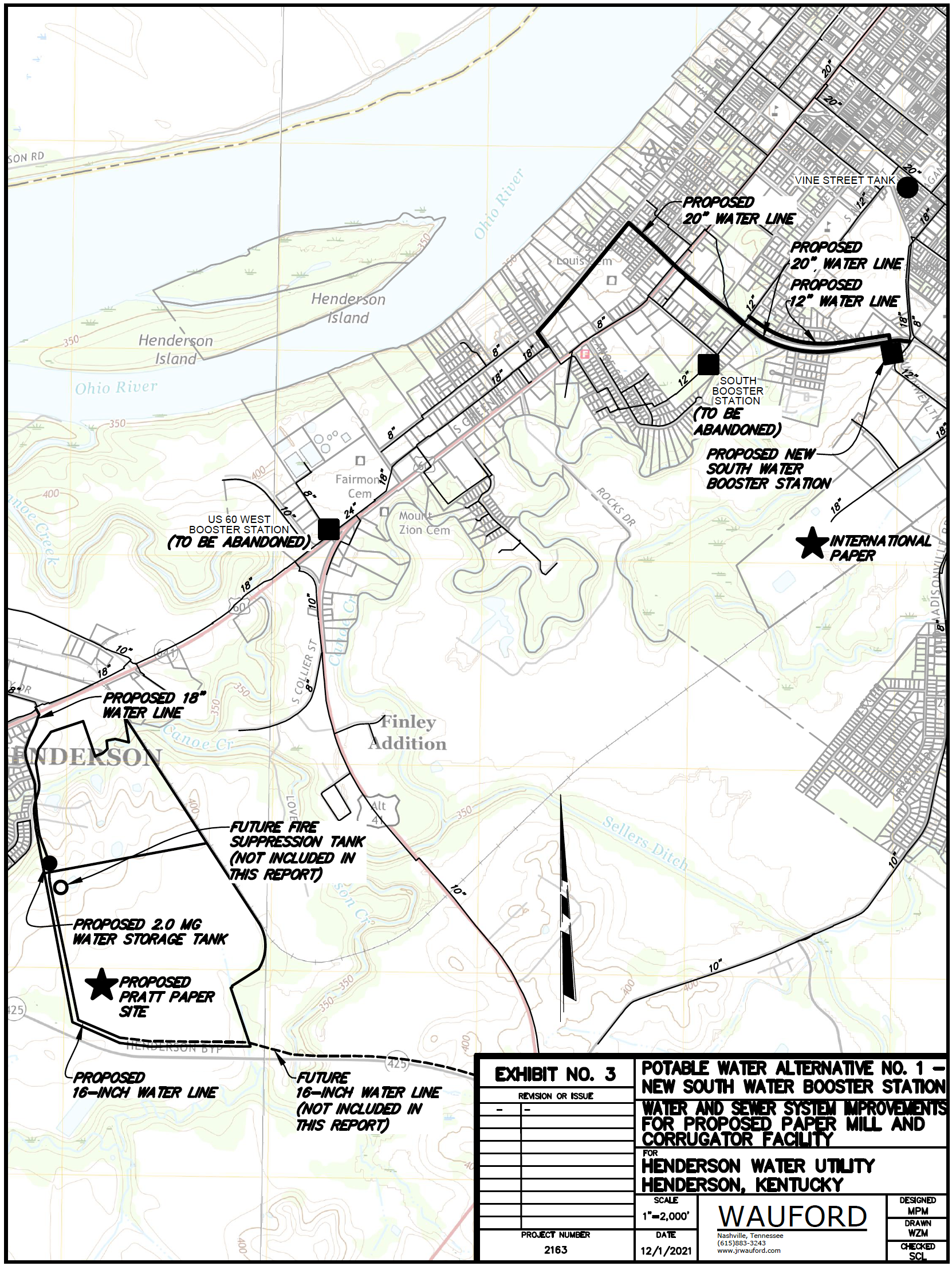