The NORTH Wastewater Treatment Plant serves the City of Henderson and some limited portions of Henderson County. 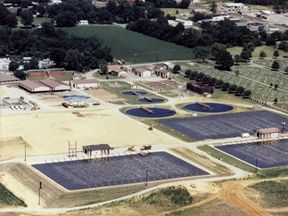 Wastewater is the potable water supply of a community after it has been used in homes, businesses, and industries and has been contaminated by use.  Wastewater treatment utilizes a combination of processes which alter and reduce the contaminants and removes them from the water, accelerating the natural processes by which water can be purified.

The Henderson Water Utility operates two Wastewater Treatment Plants, designated “North” and “South”.  The North WWTP is located on Drury Lane and serves 54 Pumping Stations and the North Wastewater Collection System covering approximately 25 square miles.  This North system contains some 190 miles of sanitary and combined storm-sanitary sewers ranging in size from six-inch (6”) to 48-inch.  There are approximately 11,000 service connections flowing to the pump stations.  The Wastewater Treatment Plant proudly serves the residents and industries of the City of Henderson, portions of Henderson County & the City of Corydon.

The North Wastewater Treatment Plant (NWWTP) was constructed as a primary treatment facility in 1954 and upgraded to secondary treatment in 1975 (aerated bio-filter) and again in 1989 (extended aeration).  The plant was renovated and expanded in 1991 & 1998 with additional aeration basins, and an additional secondary clarifier.  A large addition including a new Headworks building with new screenings & grit removal equipment, a third secondary clarifier and UV disinfection is currently under construction, with completion scheduled in June 2015.

The NWWTP is operated 24 hours-per-day, 365 days-per-year and provides full secondary treatment.  With the completion of the current upgrade project, the plant will have the capacity to provide treatment to remove over 99% of the contaminants from the water at an average flow of 7.5 million gallons per day (MGD) with a peak flow of 25.5 MGD.  This process is a dynamic process which must be properly monitored and controlled to assure maximum effectiveness with changing flow rates and organic loadings.

All wastewater entering the NWWTP is pumped, and as it enters the plant at the Headworks, it passes through a set of fine bar screens with openings of 3 mm (about 1/8 inch).  Objects which are trapped by these screens are removed by automatic mechanical rakes.  The wastewater then flows to a centrifugal-type grit removal tank in which sand, cinders, and gravel are removed from the wastewater.  The grit removal equipment removes 95% of the particles that are 125 microns or larger (.005 inches), when the flow to the plant is less than or equal to 18 mgd.  The screenings and grit are washed and stored for disposal at a landfill.  After the initial screening and grit removal, the wastewater still contains high concentrations of dissolved, small suspended solids and organic materials.  This process is known as preliminary treatment.

After the wastewater leaves preliminary treatment it enters a secondary treatment system.  The secondary process uses an extended aeration variation of the activated sludge process.  The water is first pumped to a three very large aeration basins, where it is mixed with air and activated sludge.  The detention time in this basin is 18 – 60 hours depending upon influent flow.  During this time the aerobic bacteria and microorganisms present in the activated sludge consume by “eating” most of the organic matter.  These bacteria and microorganisms, referred to in the industry as “bugs”, depend on oxygen for their respiratory systems the same as humans.  For this reason large quantities of air are pumped into the aeration basin where air bubbles rise continually up through the liquid to provide sufficient oxygen for the bugs to breathe.

All the basins are excavated “ponds” that are lined with a heavy gauge geotextile that contains the wastewater within the basin.  Two of the Extended Aeration Basins contain air diffusers that consist of vertical “drops” that float in the basin.  The largest EAB, #1, was renovated in 2011 with a concrete floor and fixed, fine-bubble diffusers as seen in this photograph. 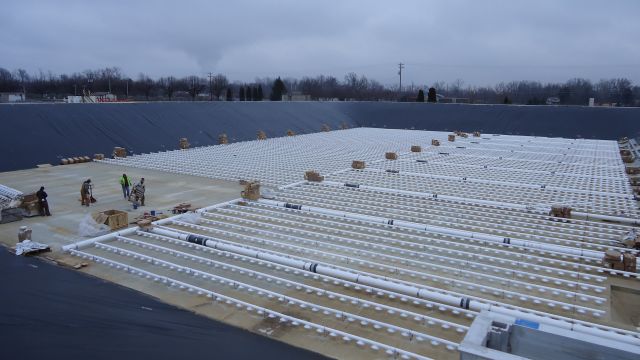 Due to better air diffusion and mixing, this basin performs at a higher level of treatment and has a larger flow-through capacity than the other two basins.  HWU plans to retrofit EAB #2 & 3 with this fine-bubble technology at some future date.

Four (4) groups of bugs do most of the “eating” in the activated sludge process.  The first group is bacteria which eat the dissolved organic compounds.  The second and third groups of bugs are microorganisms known as free-swimming and stalked ciliates.  These larger bugs eat the bacteria and are heavy enough to settle by gravity.  The fourth group is microorganisms known as Suctoria & Rotifers which feed on the larger bugs and assist with settling.

An interesting fact about the bacteria that eat the dissolved organics is that they have no mouth.  The bacteria have a fascinating characteristic in that their “fat reserve” is stored on the outside of their body.  This fat layer is sticky and is what the organics adhere to.

In wastewater treatment, using bacteria-eating bugs in the presence of oxygen to reduce the organic content of wastewater is called the activated sludge process.  The first step, the contact of the bacteria with the organic compounds, takes about 20 minutes.  The breaking up, ingestion and digestion processes which follow take 4 to 24 hours.

The fat storage characteristic of the bacteria is also an asset in settling.  As the bugs “bump” into each other, the fat on each of them sticks together and causes grouping (flocculation) of the non-organic solids into a biomass.

From the aeration tank, the wastewater, now called mixed liquor, flows to secondary clarification basins to allow the flocculated biomass of solids to settle out of the water.  The solids biomass, which is the activated sludge and contains trillions of bacteria and other microorganisms, is used again by returning it to the influent of the aeration basin splitter box for mixing with the raw sewage and ample amounts of air.  This biomass, which contains many dead “bugs”, acts as food for the live bugs in the extended aeration basins, causing them to reproduce at a high rate, jump-starting the treatment process in the basins.  A portion of the sludge in the clarifiers that is not needed to sustain the process is drawn off (wasted) and sent to a digestion and dewatering operation, described below.

The final phase of wastewater treatment consists of disinfection with UV light of a specific wavelength that kills more than 99% of the remaining bacteria.  The disinfected water is then discharged through a submerged outfall pipe into the Ohio River.

The waste sludge referenced above is sent to holding tanks, where a digestion process occurs.  As a result of digestion, the volume of the sludge is reduced and the organic solids, such as sugar, carbohydrates and fats, are broken down into smaller inert organic and inorganic solids.  Carbon dioxide, methane and water are the by-products of this organic reduction process.

When digestion has been completed, the sludge is withdrawn from the digesters to dewatering devices known as belt filter presses.  The digested sludge consists of approximately 97 – 98% water, so it is necessary to remove enough of the water to produce a material which is dry enough to be hauled in trucks.  Water is removed from the sludge by use of porous fabric belts which pass around a series of rolls at increasingly higher pressure.  For more effective separation of the water and solids, the sludge is first treated with a liquid cationic polymer which chemically causes the water and solids to separate.  The polymer treated sludge is introduced as slurry between the fabric belts.  As the belts wrap around the rolls, a large quantity of water is squeezed out of the sludge and escapes through the porous belts.  This water is then returned to the plant for treatment.  The process of removing the water is somewhat similar to that used by wringer clothes washing of years past.  The dewatered sludge cake at 14 – 18% solids is scraped from the belts on the discharge end of the presses where it drops onto a belt conveyor and is deposited in a storage building.  The sludge cake is pushed into a hopper at floor level onto a belt conveyor and loaded into trucks.  The sludge cake is currently taken to a landfill.

Supporting all the various phases of the wastewater treatment and sludge disposal process is the laboratory where numerous tests and analyses are performed on a daily basis to assure that the process variables and life support conditions for the bacteria and microorganisms are within optimum ranges.  The laboratory also helps meet our required reporting for State & Federal reports.

Although not an integral part of the actual treatment process, but critical to the success of the process, is the Industrial Pretreatment Program. This program is an EPA permit requirement established by the Clean Water Act of 1977, the purpose of which is to guard the quality of the wastewater entering the plant.  The program consists of monitoring, surveillance and regulation of the wastewater discharge from major industrial contributors to the municipal wastewater collection (sewers) system.  Discharge of certain types of chemicals and metal compounds can have a severe toxic effect on the wastewater treatment process and therefore must be regulated to prevent such discharges.  The characteristics of the discharges from some industries are such to require that the industry construct and operate a contaminant loads equalization basin prior to discharge to the municipal wastewater collection system.

The operation of the Henderson Wastewater Treatment System contributes to improvement of water quality in the Ohio River, and as a result, helps to provide recreation and health benefits for the entire community.  The Ohio River is, in certain respects, one of the community’s most valuable assets and the protection of this asset is a primary goal in the operation of the Wastewater Treatment System.  The higher water quality also helps, proportionally, to provide a cleaner water source for many cities downstream of Henderson all the way to the Gulf of Mexico.